John Bayes is a Headteacher with an opportunity of a lifetime.

In September the new school year will begin. And what a beginning it will be for Thurston CE Primary Academy. John will be leading the school in the amazing new building on Norton Road. Excitement will be in the air as pupils, parents and staff arrive on the first day of term.

Before then a lot will have happened.

Barnes Construction will have completed the building. All the planning and hard work to create the school will have paid off. It will be ready and waiting.

What is often described as ‘the long summer holidays’ will be anything but that for the school staff. Just as the removal men have to be booked ahead for a house move when the van is packed with furniture and belongings, so they have been to move the furniture from the current school site on School Road. The desks and chairs, along with all the other school kit, will have been packed up and labelled by the staff after the end of the summer term. The labelling will make sure it is all delivered to the appropriate rooms towards the end of the holiday. Then all the unpacking and sorting out will take place.

So, what will the new school be like? Concertus Design and Property Consultants and Barnes Construction who are overseeing the project have worked closely with the school to identify learning opportunities for pupils and integrate them into the existing school curriculum.

The two-storey building will have spacious classrooms and purpose-built, interactive whiteboards; there will also be specialist rooms such as a dance studio and a room for art, design technology and science. There will a library and large hall. The new catering equipment will have been installed ready to produce meals every day the school is open. There will also be an outdoor classroom for stimulate interest in gardening: watch out for the produce stall!

All the current staff will be moving to the new school. There will be four additional, new staff bringing specialist skills such as dance, languages, English and maths.

How does John Bayes envisage the all-important teaching will be organised? He, and Deputy Headteacher, Amanda Wigzell have been working with staff to create some new ways of working with opportunities for pupils to continue to work in age groups as well as new mixed age group lessons. At the moment there are seven classes: in the new school there will be ten.

Thurston Preschool will be onsite too; children aged 2½ to 5 will be in their own building alongside the primary school. They will be using the school for breakfast club and after school too. The aim is to provide seamless care and the best preparation for moving to primary education.

Linking with the community is important to John Bayes and the school. Thurston Library is down the road and links are already planned. And the school will be available for the Thurston community to use.

As Thurston grows, so will the network of paths and cycleways. When the school is open, children and parents will be encouraged to use them to walk and scoot to school.

So, with all the excitement, when will be the chance to get involved and walk into the building for the first time? Plans are to invite children and parents to look round the school just before opening in September. Watch out for details if that means you!

The new school really is a new start and an important part of Thurston’s journey: the wonderful building and, as far as possible, new equipment will bring fresh opportunities to Thurston’s children. And as families with primary-aged children move to Thurston, the school looks forward to welcoming them.

You can understand why Headteacher John Bayes and Deputy Headteacher Amanda Wigzell are excited. All best wishes to them and their team in these busy next few months. 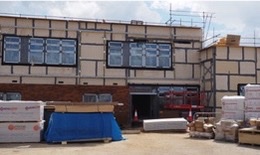 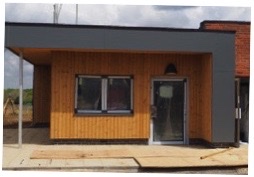